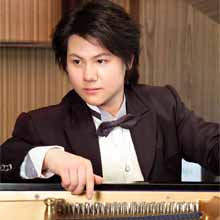 Japanese music critic Satoru Takaku once commented in Japanese classical music magazines, the latter being the music critic of the Japanese magazine “Chopin Lover”, that the performance by the Germany-based pianist Yi Fan-Chiang is “undoubtedly the most remarkable among the performers tonight of the Gala Concert; unquestionably, in his superb playing, we see the endless future of the piano circle.”

Pianist Yi Fan-Chiang emigrated to study in Germany at the age of thirteen. He graduated from Hochschule für Musik und Theater Hannover and received Konzertexam. During his working on PHD with Prof. Matti Raekallio, he was already qualified for piano instructing as a lecturer in his school in Hannover, and simultaneously substituted for Professor Tomislav Baynov at Musikhochschule Trossingen, instructing piano in master and doctoral degrees for many years. Up to the present, he has been receiving more than 30 awards from international competitions, foundation and institutions.

While teaching and performing intensively, pianist Yi Fan-Chiang spares no effort in popularizing artistic and cultural activities. He has been instructing music talented children at Special Education; meanwhile, he was invited to be the distinguished professor of master classes for high quality educational project for Senior High School, during which he put numerous efforts in nurturing the young talents. His pupils and students have achieved great results in nationally and international events from Japan, Macau, America, France, Germany, Italy to Spain.  Yi Fan-Chiang has been invited to assume the office of the councilor of National Theatre and Concert Hal for two consecutive years, the director of the board in Frederic Chopin Foundation of Taipei and the chief consultant of 2016 Virtuoso Taoyuan Music Competition. Since 2016 summer he is also the head of the piano department at Taipei National university of the Arts.

The performance of Pianist Yi Fan-Chiang has been regularly requested in countries among  the Europe, Asia and U.S.; his piano lectures and master classes have also been held in Germany, China and Taiwan for many times. The video recording of his performance has been widely broadcast on public TV channels and radio stations in Germany, Poland, Russia, Belgium, France, Italy, Romania, Spain, Israel, America and Taiwan. He also cooperated with many orchestras such as in Germany, Italy and in Taiwan like National Symphony Orchestra Taiwan, Evergreen Symphony Orchestra, Taipei Philharmonic Orchestra, Kaohsiung City Symphony Orchestra, Philharmonia Moments Musicaux, Taipei Symphony and Chinese Orchestra, Chiuko Traditional Orchestra, TNUA (Taipei National University of Arts) String Orchestra, NTUA (National Taiwan University of Arts) Wind Orchestra, along with others. Click-throughs to the videos of his collaborative piano concerto concerts with Evergreen Symphony Orchestra are available in the audio and video programs provided by Eva Air. Moreover, he has been participating in at art festivals including Braunschweig Classix Festival and Schleswig-Holstein Music Festival in Germany, Concurso y Festival Internacional de Piano de Ibiza in Spain, Fête de la Musique in France and also on similar occasions in Austria, Russia, Israel, China and many countries.

Inheriting from the German and Russian piano schools, pianist Yi Fan-Chiang has been instructed, supported and influenced profoundly by many important contemporary musicians, such as maestro Lazar Berman, the Russian pianist and conductor Igor Zhukov, who is one of the important interpret of the works by Scriabin in our time; Paul Badura-Skoda, the late German pianist Conrad Hansen, who played and made recording with the legendary conductor Wilhelm Furtwängler; Pavel Gillilov and many other great pianists. 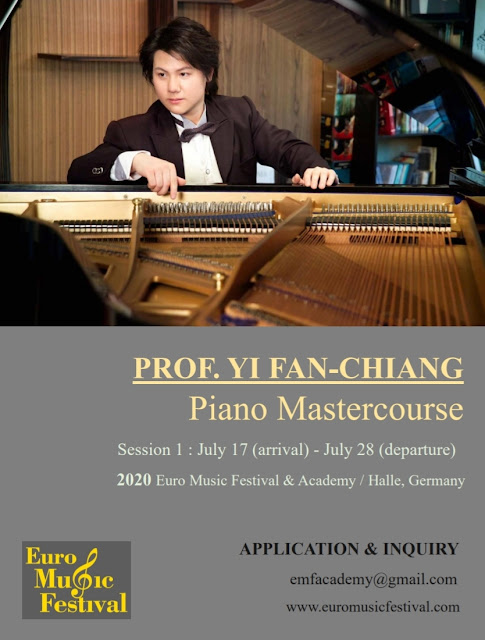