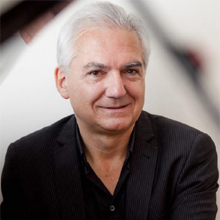 Olivier Gardon was ten years old when he first performed with an orchestra at the Opéra de Nice playing Bach's piano concerto in D minor. Three years previously, the young prodigy had come to the attention of the Hungarian pianist Lili Kraus, who had strongly encouraged him to pursue a career in music.

Olivier Gardon was trained by Mme Audibert-Lambert, a student of Alfred Cortot, and went on to study at the Conservatoire de Nice and at the Conservatoire National Supérieur de Musique (CNSM) in Paris with Pierre Sacan, a student of Yves Nat. After being awarded first prize for piano by a unanimous jury and winning first prize for chamber music in Jean Hubeau's class, he perfected his skills under the guidance of Jean Fassina, Géza Anda, Lili Kraus, and György Sebök. This renewed encounter with the Hungarian school enabled him to enrich his sound palette further and to perfect his technical mastery and control of movement.

His first critics hailed him as a "highly colourful artist"   and praised his "elegance, ease and refined touch" as well as his "strong stage presence, his torrential sensitiveness, his ability to work the keyboard like a sculptor giving shape to living material". Since then, his career as a soloist and chamber musician has taken him to all the greatest musical venues of the world.

In London, he has performed as a chamber musician at Wigmore Hall. He"truly amazed" his audience at the Royal Festival and at the Barbican when he performed Beethoven's Concerto n°4 and Schumann's concerto with the London Symphony Orchestra. His performances as a soloist at the Grand Festival Hall in Salzburg with the Mozarteum Orchester, or as a chamber artist in the Grand Hall of the Mozarteum Foundation have earned him praise, most notably for "his technical and musical mastery, power and rhythm" as well as for his "command of the sound palette, from (...) restrained poetic lyricism to dramatic pianistic gestures."
In the US, for his debut at Carnegie Hall, the New York Times critic praised his "full-bodied, clear, clean and refreshingly unsentimental" playing.
In Japan, he has performed at Kioi Hall and at the Bunka-Kaikan in Tokyo, at Izumi Hall in Osaka, and at Hamamatsu Act City. At the Aichi Concert Hall in Nogoya, he played Liszt's Concerto n°1 accompanied by the Shinsei Nippon Orchestra as part of a New Year's concert broadcast live on NHK.
In Paris, where he is known for his "poetic playing and fingers of steel", and his "noble and intense" style, also described as "confident, sincere and sensitive", he played Bach's Concerto in D minor at the Salle Pleyel, with the Orchestre philharmonique de Radio France, directed by Ferdinand Leitner. He has also given recitals at the Théâtre du Châtelet as well as at the Théâtre des Champs-Elysées, where he has performed under the baton of Samuel Friedman.

He has been a featured artist at many festivals such as the Prague Spring Festival, the Fêtes musicales à la Grange de Meslay, the Festival de Saint-Denis, the Festival de Montpellier, the Fêtes romantiques de Nohant, the Festival Chopin à Bagatelle, the Midem classique, the Busan Music Festival (South Korea), the Bowdoin Music Festival (United States), and has performed on several occasions with the Orchestre de Lille directed by Jean-Claude Casadesus.
He has been a guest on radio stations in Europe, including Radio France, RIAS in Berlin and Radio Suisse Italienne, and has recorded for various labels. He collaborated with BNL to record Liszt (which earned him 4 Diapasons d'or), Mussorgski's Pictures at an exhibition (4 Diapasons), andBeethoven's last three sonatas (4ƒ Télérama). Timpani released his version of the complete works of Vierne (4 Diapasons), chamber music pieces by Vierne (4 stars, Le Monde de la Musique) and by Vincent D'Indy, Alkan's complete chamber music (Prix spécial de la Nouvelle académie du disque français, 5 Diapasons). His latest recording, for Ameson, features Brahms'Sonata in F minor and Variations and Fugue on a Theme by Handel (5 Diapasons).

Olivier Gardon is a professor for piano at the University of Music, Theatre and Media, Hannover, Germany and also teaches piano at the Conservatoire à rayonnement régional de Paris and is the Artistic Director of the Académie internationale d'été de Nice. He is regularly invited to teach master-classes at numerous music academies including the Sommerakademie at the Mozarteum Foundation is Salzburg, The Toho Gakuen School (Japan), the French Music Academy at the Institut franco-japonaise de Tokyo, Yonsei University in Seoul, Bowdoin College in the United-States, the Académie musicale de Villecroze, Music'Alp Courchevel, the Musikhochschule in Leipzig, Euro Music Festival & Academy, etc.. 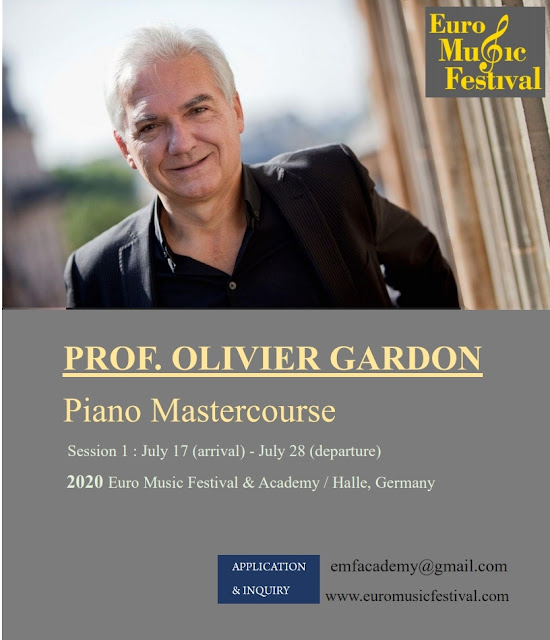